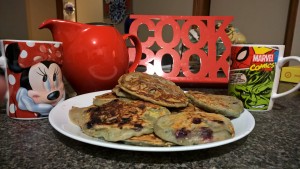 We made zombie brain (blueberry) pancakes and they were EPIC!

My favourite part about it was flipping  them. I flipped  6 but my  sister burnt her little finger on her right hand on her  1st go today. She is ok. I’m going to bring them to my excursion.

In order to unwind from a whirlwind week, I hit the kitchen pretty hard today. Amid boiling blueberry bagels, pouring Coca-Cola over a perfectly good piece of pork scotch fillet (awesome, by the way), and trying to work some seriously sticky brioche dough, while also keeping Master 7 and Miss 4 involved and happy, it hit me:

I need a family cooking blog.

After having my final baby, I toyed with the idea of a family cookbook with photographs and handwritten comments to snapshot the hilarity, frustration and satisfaction that comes from cooking with a young family. Deep down, I knew this was never going to happen. Even if I went to the effort of creating something, I’d have lost it well before it meant anything to anyone. And printing out photos of a cake? Oh, please. It just wasn’t going to happen. However, I am one of those irritating people who photographs the more exceptional dinners and updates my Facebook status about lunch. So a blog, requiring minimal resources but meeting my very first world needs, is perfect. It also doesn’t hurt that I will spend the next 18 months blogging for uni, so I can practise over here where I don’t risk failing an expensive postgrad course 🙂

So here we are.

I am hesitant to explain my vision for What’s Cookin’ Good Lookin’, because I know it’ll change many times over. But integral to this project is that the kids will be heavily involved. Master 7 will be posting and potentially vlogging, and most posts will centre around cooking I’ve done with the kids. I strongly believe that cooking with kids is beneficial to their life skills, and also their functional literacy and numeracy, their sense of belonging and responsibility within the family unit, their creativity, and also to creating a healthy relationship with food. As such, I involve my kids as much as I can. They are both interested in cooking, which is awesome, and Master 7 is pretty excited about What’s Cookin’ Good Lookin’. Hopefully this venture fosters his literacy, ICT skills, his awesome foodie interests and our bond. We’ve got some exciting ideas to get him involved, and also his sister as she gets older.

So stay tuned because, really, who doesn’t want to see a picture of a sushi roll made by a 4 year old with less than perfect vision?