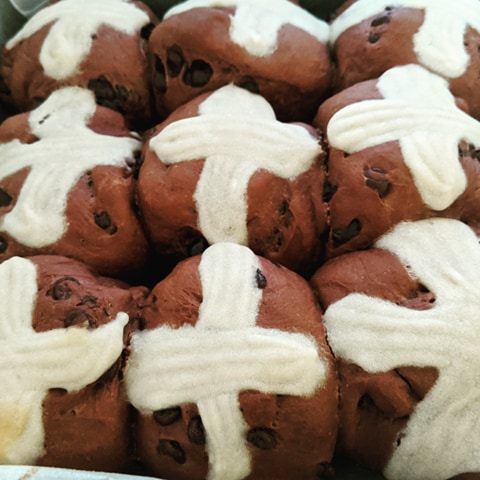 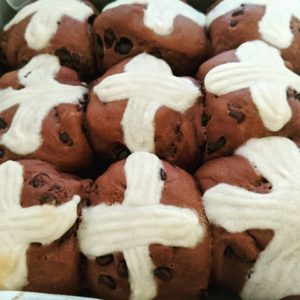 All I wanted in life were homemade hot cross buns that were as tall and fluffy as the buns you buy at the stores. Was that really so much to ask?

Hot cross buns have long been my kitchen kryptonite. I  faithfully follow recipe after recipe, only to end up with vaguely spiced house bricks. Even my most trustworthy sources result in sad, flat, dry discs. My first attempt was so unlike the intended product that they were dubbed “not cross buns” by the not-as-funny-as-he-thinks-he-is Master 8.

And the crosses were indeed my culinary cross to bear. So many failed methods tried, like spooning them into scored dough. I’ll spare you the humiliating details of that venture and leave it at nope. However I did it, they were always either too fat or too wet or too messy or too straggly, and never quite enough like ancient execution contraptions jauntily placed upon seasonal baked goods.

So, I didn’t really expect that a recipe that randomly appeared on my Instagram feed would be any different, especially as I didn’t think I was interested in a chocolate bun recipe, but it’s 4 days until Easter, and I just couldn’t resist.

And thank heavens I did not, because let me tell you, I have found The One. The holy grail of HCB recipes. Tall, fluffy, soft, and – despite the chocolate – just sweet enough to be sweet. Delicious.

I’ve adapted the linked recipe to suit my own preferences, equipment and pantry items. I suspect this is a relatively forgiving recipe, or at least as forgiving as baking gets.

1 1/2 tsp yeast
1 cup milk, warmed
1tbsp caster sugar
3 cups self raising flour
1/4 cup cocoa
1 teaspoons cinnamon
1/2 teaspoon nutmeg
2tbs caster sugar
60g butter, chopped
1 egg, lightly beaten
2/3 cup chocolate chips (a mix of milk and white chocolate is the best)
Crosses
1/2 cup plain flour
2 teaspoon raw caster sugar
4tbs cold water
Glaze
1 teaspoon gelatine powder
2 teaspoons raw caster sugar
1 tablespoon boiling water
Method:
Prepare a 20cm square cake tin with baking paper.
Combine yeast, milk and 1 tablespoon sugar in a bowl. Cover and set aside in a warm place for 10 minutes or until foamy.
Sift flour, cocoa and spices into a bowl. Rub in butter until mixture resembles damp sand.
Make a well in the centre. Add yeast mixture, egg and sugar. Stir to combine. Turn onto a lightly floured surface. Knead for 10 minutes, or until smooth and super elastic. When you think you’ve kneaded enough, go for 2 minutes more.
Transfer to a lightly oiled bowl. Cover. Set aside  for 1 hour or until doubled in size.
Punch dough down. Turn onto a floured surface. Knead for 5 minutes or until smooth. Make a well in the centre, and add 1/4 choc chips. Cover chocolate with sides of dough and knead to combine. Repeat until all chocolate chips are incorporated.
Roll into 16 equal-sized balls. Place in prepared pan. Cover. Set aside  for 30 minutes or until dough has almost doubled in size. Preheat oven to 200°C.
To make crosses, combine flour, sugar and cold water in a bowl. Spoon the paste into a piping bag or strong sandwich/zip-lock bag. Snip 1 corner from bag. Pipe crosses onto the top of each bun.
Bake for 10 minutes. Reduce heat to 160°C fan-forced. Cook for 15 minutes.
To glaze, whisk gelatine, sugar and boiling water in a heatproof jug until gelatine has dissolved. Brush over hot buns.