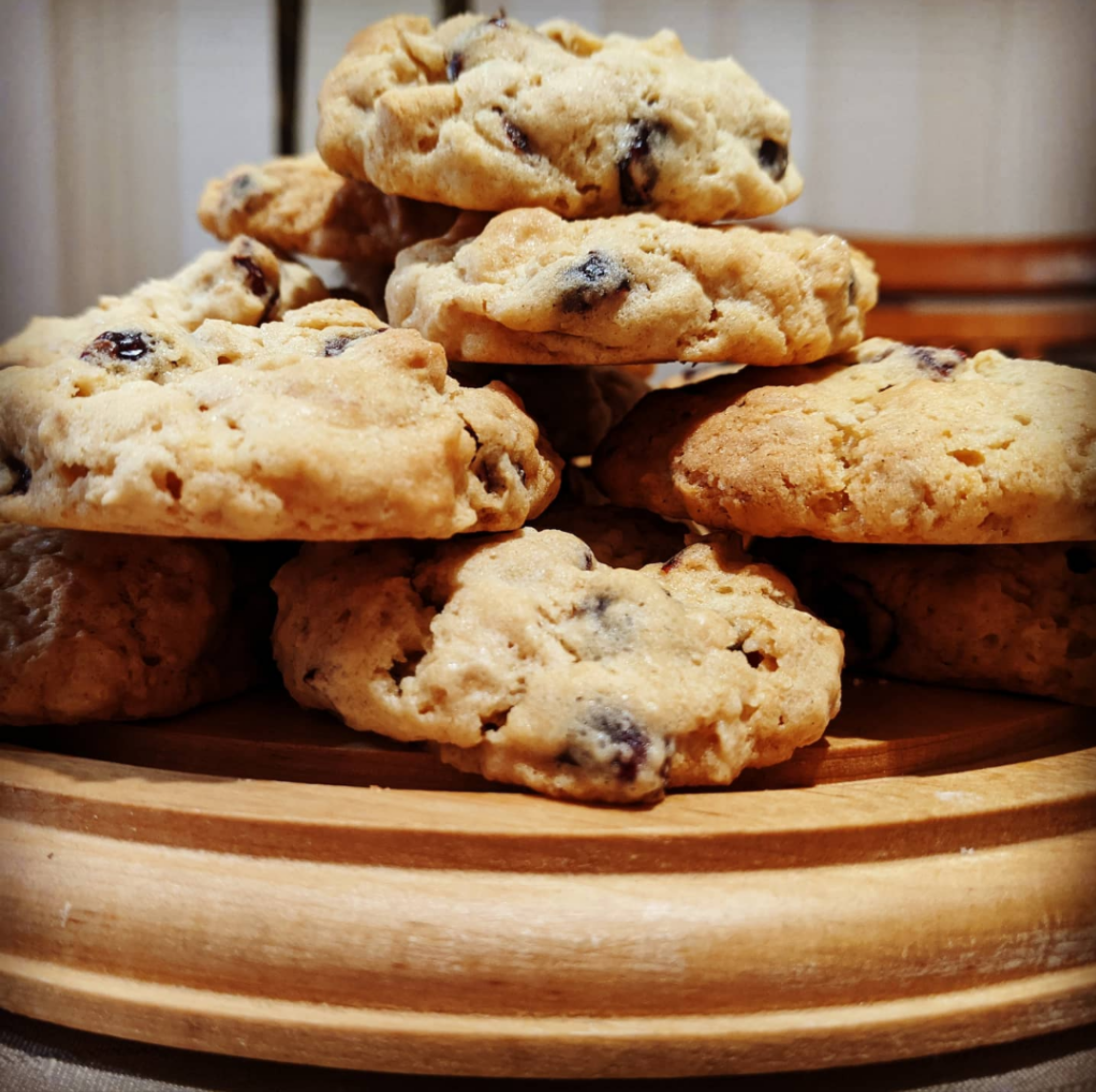 I’ve had an urge to bake cookies this week – I think it’s the cold, rainy weather – far more than I’ve actually had an urge to eat cookies. Surely I’m not the only person that craves the cook more than the result sometimes? However, the result of this urge wasn’t exactly a hardship: chewy, soft cookies that are tart and just sweet enough. Better yet, the result was just that little bit different to a standard chocolate chip cookie (not that I would ever badmouth such a classic!), without being as indulgent as my Reeces snickerdoodles or blackforest cookies (neither of which have made it to my blog, but surely I won’t hold on you forever!), and therefore the perfect compromise.

At 130 calories per cookie, these are pretty standard in terms of your chocolate chip biscuit, which was reassuring, because some cookies hit double this without much increase in size or flavour, and really, you want your treats to be worth it. To me, I haven’t met a cookie worth nearly 300 calories, but I find 130 calories is easy to build into a reasonable day. And really, we’re all entitled to a little treat now and then. The more time I spend in this healthier lifestyle, the less I worry about numbers. It’s a liberating feeling, but I still like knowing what I’m eating, so I keep tabs on caloric values, even if I no longer count them like I used to.

NB from Master 12, Miss 9 and The Husband: apparently, they make a fantastic ice cream sandwich.

NB from Mac the dog:


“I am the goodest boy and didn’t eat the cookies, even though Mama left us together unsupervised. She should reward me. With cookies.”

Let’s just get this out of the way – these are NOT for calorie counting days. At over 300 calories a pop, these delicious morsels are the embodiment of a ‘sometimes treat’.

I adapted this recipe from the Taste.com, and after much experimenting, settled on this incarnation. The original recipe has a butterscotch-esque icing, but I found that with such a rich brownie, while the icing was delicious, it was seriously overkill. Conversely, without the icing, using all dark chocolate made them too intense (and I say that as a girl who loves her chocolate dark and bitter). But by using an even mix of dark and milk chocolate, we’re left with a well balanced slab of heaven. Words of advice:

a) splurge on good quality chocolate, you truly can taste the difference. 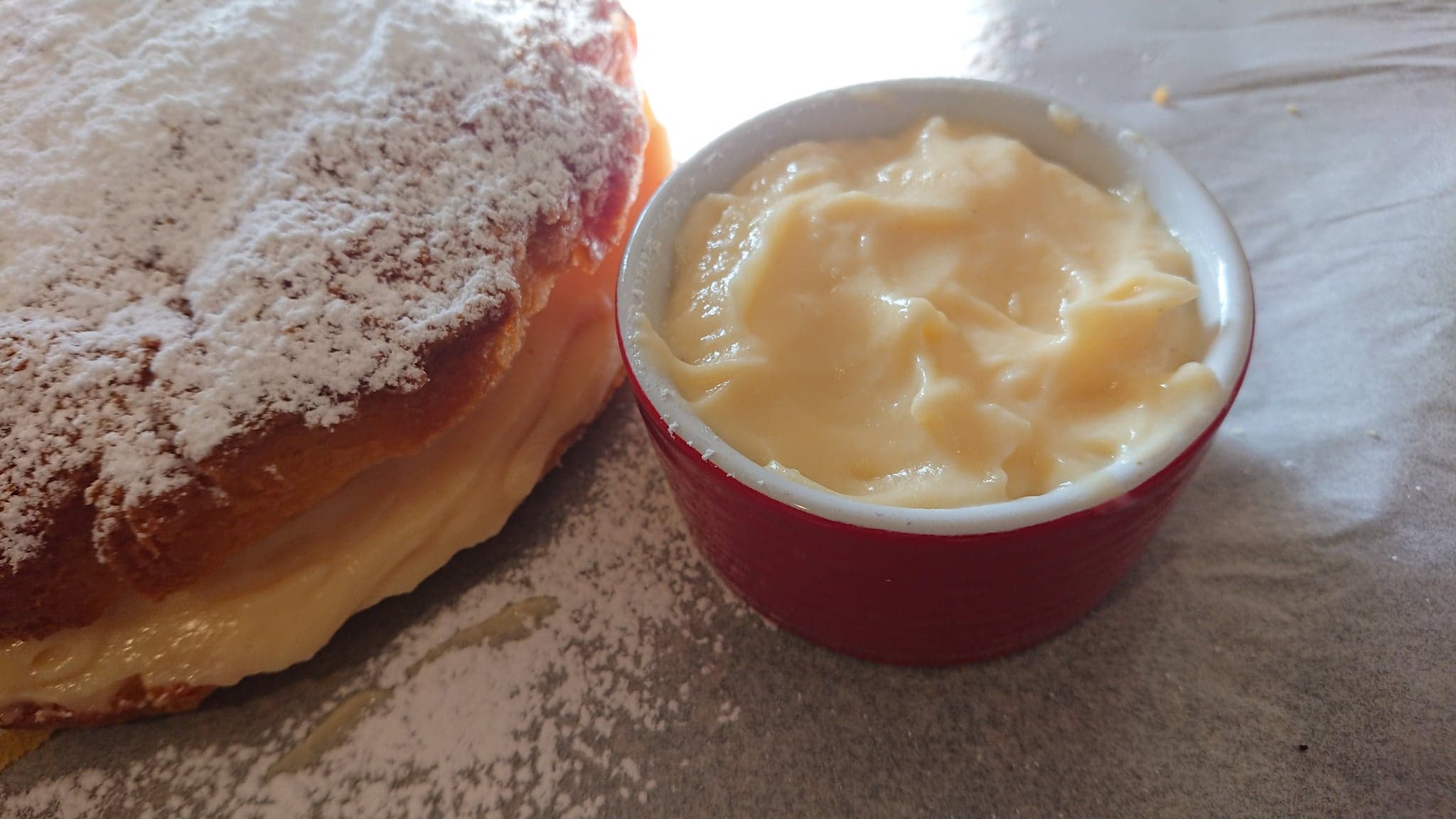 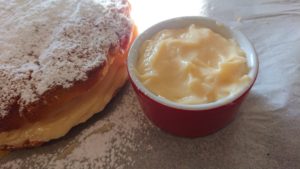 If watching shows like Masterchef has taught me anything, it’s that a) you can’t cook without a lame sob story, and b) crème pâtissière is technical and difficult.

Both of these assertions are bull. I knew the former was a load of tripe cooked up by desperate television producers, but for some reason, fell hook, line and sinker for the latter. I’ve always just avoided it, made desserts that don’t call for it. I really don’t cook decadent desserts all that regularly, and there are a slew of other options, so I’ve been able to keep my fear of the Crème pât my little secret for years.

This week, my son turned 11, and the little foodie wanted creme brûlée donuts as his birthday cake. Unwilling to disappoint my first born, and after finding a recipe from Sugar Hero that looked better than the rest, I set out to make his donuts.

I’m still perfecting them, to be honest. The test batch were perfection. They were moist and fluffy, stuffed with silky, delicious creme patissiere, coated in a vanilla glaze, and set alight for a crunchy lid that cracked so satisfyingly, I almost yearned for a cigarette. I dutifully set one aside for my loving husband, and took the rest to my dad’s, where we shared them with some very grateful neighbourhood kids. When I got home, the dog had eaten the husband’s. Hubby was less than amused, but Mac seemed very pleased with his ill-gotten treat.

The second batch failed, epically. Burned on the outside, and raw in the middle. Like, so raw, it looked like I’d already filled them with the custard. Of course, this failed batch was the one that actually counted because I made them on his birthday, which happened to fall on a public holiday, so my emergency back up options were extremely limited. Thankfully, Krispy Kreme was open, and the boy was hardly disappointed in being taken there to go nuts. He was thrilled with this contingency, but I was still so, so disappointed. I think I know what I did wrong, and will try again. But, honestly, I’ll probably keep playing around with donut recipes, while keeping the Sugar Hero one handy, because it really was very good.

What I won’t be looking for, however, is another Crème pâtissière recipe. Sugar Hero NAILED it. It was thick, silky, sweet but not tooth-achingly so, vanilla-y and the right level of eggy. It can also be made ahead of time, which is what I had done with the second batch of donuts. I now had a serving of the custard, and no donuts to squirt them into. As it was Easter weekend, and I had another party to attend the next day, I whipped up a Birthday Custard Sponge from Nigella Lawson, and sandwiched it with the Crème pât. It. Was. Heaven.

This particular recipes yields a fair amount of crème pâtissière, but I truly don’t see that being a problem – it’s very versatile. And delicious by itself. If you find you have any left over from whatever you use it for, a spoon is all you’ll need to rectify that little problem. I’m also looking forward to making a traditional crème brûlée with it.

I’m not even bothering to look up the calories for this one. It’s too variable – how much of it you eat really depends on what you do with it. Chances are, though, if you’re having a crème pât kind of dessert, you don’t really want to know, anyway. 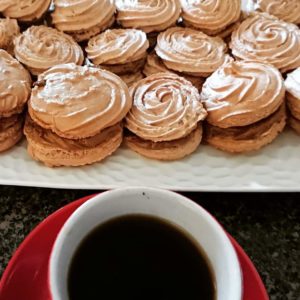 I’ve long had a love-hate relationship with macarons since the Zumbo craze a few years back- they’re delicious, of course, but they’re also expensive and just a tad pretentious for what they are. And I was convinced that they’d be hard to make, even though I do know my way around meringue and baking in general. I wrote them off as something I’d never bother to make years ago.

For my later, I received a gift certificate from my mother in law to the Paris International Cooking School (sadly, in Sydney, not Paris, but it was still an awesome gift!), and walked out of there a few weeks later with a bunch of recipes, a full belly, and, inexplicably, a bottle of gourmet coffee flavoured syrup I’d purchased on a whim. Predictably, that syrup sat in the dark recesses of my baking cupboard for a month or so, until today, when another impulse purchase took me by surprise – a 2kg bag of almond meal.

You can see where this is going.

With all these ridiculous ingredients, guests on their way, and a healthy fear of what was to come, I had to work out the most fool-proof option for making these macarons. Thank goodness for Elaine and her recipe at The Spruce Eats,

as not only did she provide a really simple and effective base recipe that I could change up a bit, but she also talks the reader off the ledge every step of the way.

All I did differently here was add a teaspoon of cocoa to the macaron mixture, and a dash of coffee syrup to the filling. And it was perfect. Chewy, light, barely sweet, and a breeze to cook for only 110 calories a pop (if you make 12). I did, however, find that I had to keep them in the oven longer, but ovens are notoriously fickle, so I took that with a big old grain of salt.

Preheat the oven to 140 C. Line two baking trays with baking paper, and draw 12 circles on each of them, using a shot glass as a stencil.

Sieve the icing sugar and ground almonds into a large mixing bowl, ensuring there are no lumps – I like to whisk the end result, just to be sure.

In a separate clean bowl (I used my stand mixer here), whisk the egg whites and salt until they form soft peaks. Add the caster sugar little by little, whisking until the whites are glossy and stiff peaks form.

Gently fold in the almond mixture. Don’t worry that the meringue loses air, this is normal.

Fill a piping bag with the mixture. Don’t use the star nozzle like I did at first – you want a round, flat base here. Pipe the mixture onto the rounds, filling in the circle.

Gently bang the baking trays on the bench to release any air pockets. Leave on bench to dry out for 20 minutes.

Bake the macarons for 15 minutes, opening the door halfway through to allow any steam (and hence moisture) to escape. Remove from the oven, and allow to sit in their trays until cool. They might seem a little underdone, but will firm upon cooling.

To make the filling, cream the butter and gradually beat in the icing sugar. Add flavouring and beat a little more. Spread 1/2 tsp of filling onto the flat side of one macaron, sandwich with another, and gently twist to cement them together. Repeat with remaining cookies. 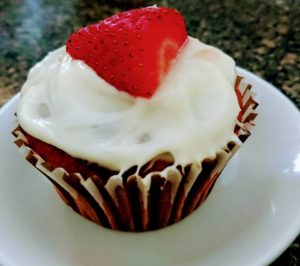 While I do take a healthy diet and lifestyle very, very seriously, I’ve long said that the secret to my success is that I haven’t cut anything out, I’ve just cut it down.  Sugar, fat, carbs, white food, alcohol, bagels, cake – you name it, I’ve almost certainly eaten it since starting  my fitness journey nearly 18 months ago. It’s all about balance, and making sensible choices in terms of portion size and what else you eat that day. Conscious, mindful eating. That’s my boring trick.

Today, I was expecting anywhere between 1 and 12 people in my house today, with no idea what time anyone would be over. I wanted something delicious, fun to make, and flexible to cook/store, that my kids and I could bake in the middle of a heatwave. These muffins were just the ticket. Part muffin, part cheesecake, and 100% delicious, we had as much fun making them as we did eating them. And when only 2 people ended up dropping by, I simply froze the extra (non-frosted) cakes, so we now have emergency cake. PLEASE tell me I’m not the only person who feels far more comfortable in life knowing that there is emergency cake stashed in the freezer!

This recipe is very closely adpated from Taste.com.au, however, by making 20 smaller muffins instead of 12 jumbos, I cut the calories to a much more palatable 297 calories, proving once again that you can have your cake and eat it too!  They’re pretty sweet – I don’t think I could have eaten a jumbo muffin anyway – these the perfect treat size. For me, any way.It’d make a perfectly respectable whole cake, too, provided you used a rather large tin – with four eggs in there, the rise is considerable. I’d hazard a guess that the cream is pretty optional in the icing, and will skip it next time (and there will be a next time!), although it wasn’t ruining anything by being there.

3/4 icing sugar (the original recipe calls for 1/3, but I found it was too runny and tasted far too much of cream)