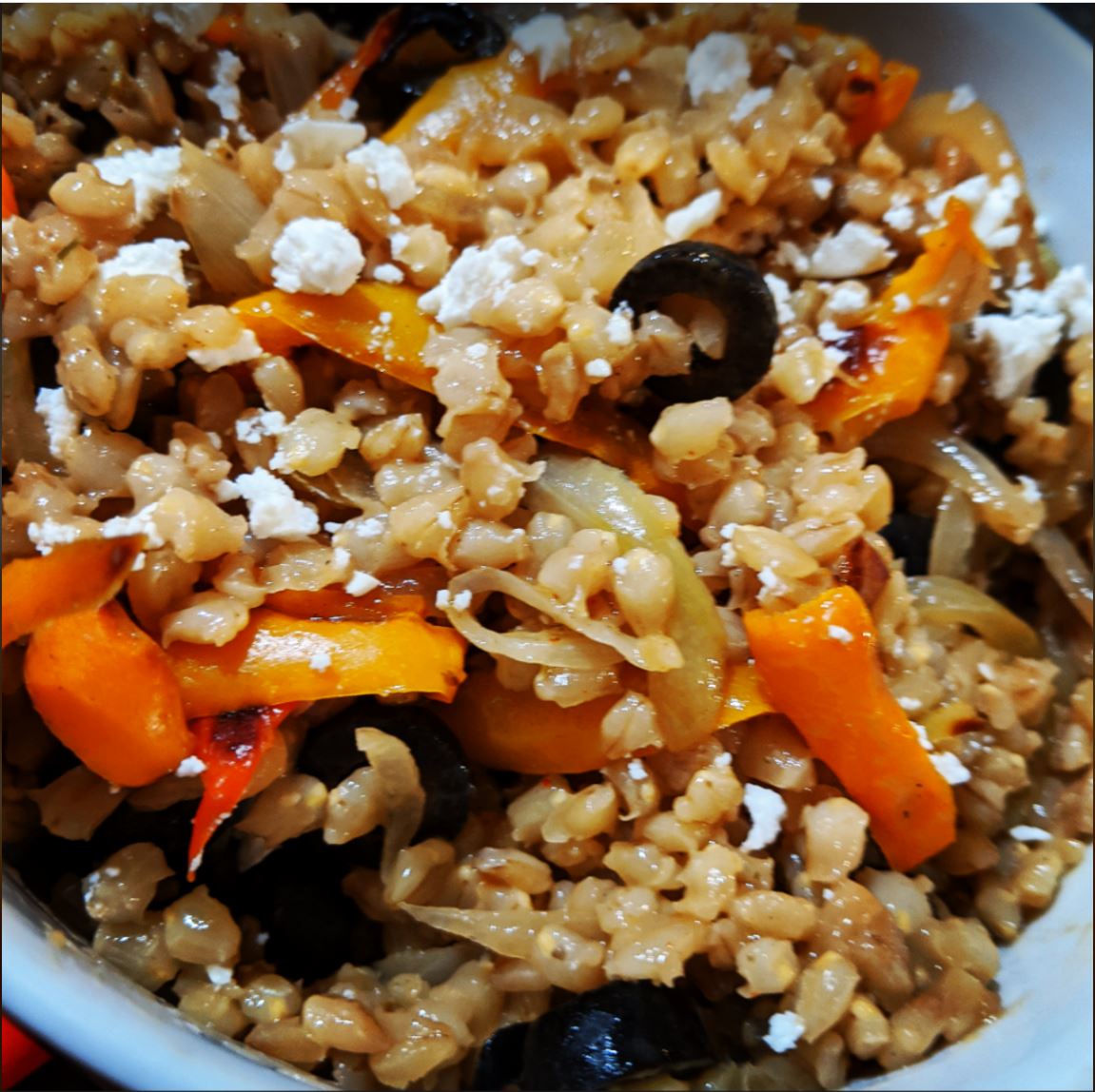 It’s a cruel trick that the universe likes to play; one week, I’m bored and feel I have nothing to do in my life, the next, I’m run off my feet working, studying, mumming, wifeing and existing. I never seem to hit a happy medium. Of course, on those busy weeks, meal planning becomes all the more important (once you work out where to squeeze it in, that is), otherwise it’s the perfect storm for falling back into some reaaaaalllllly bad habits that are best left back in 2017.

As such, Sunday afternoons are for meal prep. I long ago worked out that the best antidote for a case of The Mondays is a killer work lunch, and this salad, adapted just a little from my current cuisine-crush Ottolenghi, is just that. If you’re after something to look forward to, take your pick from the nuttiness of the barley, the sweetness of the onions and capsicum, the tartness of the lemony dressing, the saltiness of the feta, the sharpness of the olives… the list goes on. Every mouthful is just a little bit different, and while it’s 6.30 on a Sunday night, and I won’t be eating it for another 18 hours (and 2 meals!) from now, I’m already looking forward to it.

At 355 calories a serve, this is slightly higher than my usual lunches (but much less than Ottolenghi’s, as he uses 5(!) tablespoons of oil) , however it’s so wholesome and real, that it won’t leave you reaching for the cookie jar at 3pm. It’s very much worth the extra 50-80 calories to me. It’s just disappointing that I didn’t double the recipe – it only yields 2 serves, and I fear my husband will steal my Tuesday lunch!

200g capsicum (I like to use yellow and orange baby capsicum), sliced into strips about 2cm thick.

The number of cookbooks in my house is nothing short of ridiculous – and yet, they continue to grow despite occasionally finding one that I don’t remember ever buying or reading. Once I get over the guilt, it’s like nerdy foodie Christmas.

The other day, my son found some such gem hidden in with the rarely touched board games. The Healthy Life Cookbook, probably purchased well before I really cared about such things, was covered in a thin layer of dust – I swear I don’t remember how or when it got into my house. But, with renewed enthusiasm, I pored over the recipes, and stopped dead in my tracks at this one. Barley? Feta cheese? Spinach? I’m in!

At 311 calories for a hearty serve (this recipe yields 4 serves), it’s filling enough for a light dinner, and absolutely perfect for a work lunch. I did learn the hard way, however, to sprinkle the cheese on as you go if you plan on it lasting more than two days (it really doesn’t last much longer than that anyway, but you don’t need slimy feta ruining your Tuesday). Sounds obvious as hell now, but oh well… live and learn.

Oh, look. Another barley recipe! I don’t actually eat a lot of barley, but I absolutely adore it, and am always so excited to find low-calorie, delicious recipes with what is, hands down, my favourite grain.

Strangely enough, it’s never really occurred to me to cook it in my cast iron pot… I’m usually the goose standing in front of the stove for forty minutes at a time, stirring and adding bits of water at a time to stop it from sticking to the pan. Oh, sure, it’s a labour of love well worth the final result, but frankly, sticking it in the oven with slightly more water than I’d normally use is even better.

The combination of chilli and craisins is an absolute winner here, and lends to a sweet and spicy combo that really keeps things interesting. I know slow-cooking rump steak isn’t really the done thing, but I took the risk in hopes of keeping the recipe as low-cal as possible, and it worked. At 423 cals for a good-sized bowl, this stew is perfect for cooking the night before, ready to nourish and warm you up after a wintery evening of schlepping the kids to their various sporting commitments. 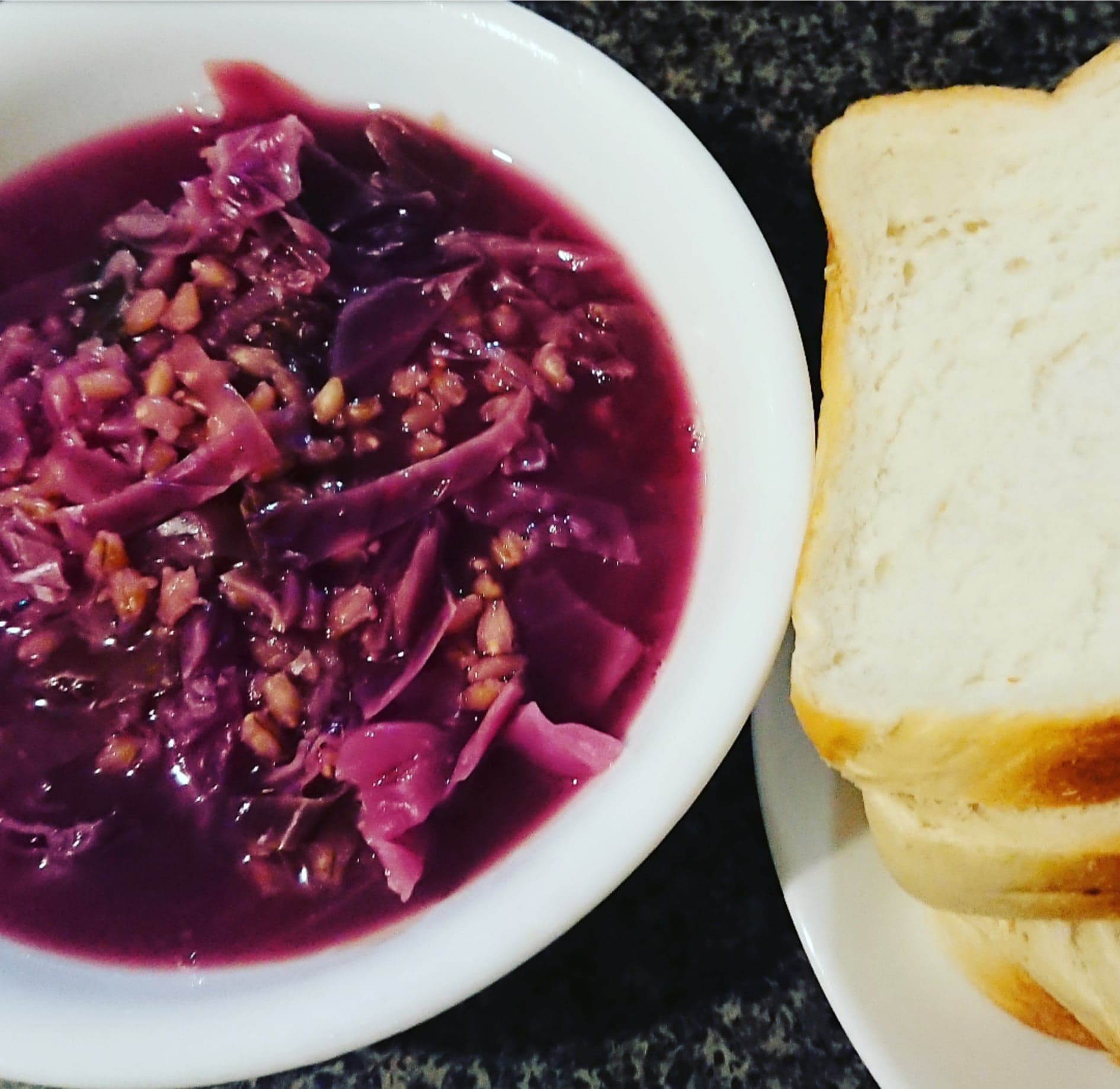 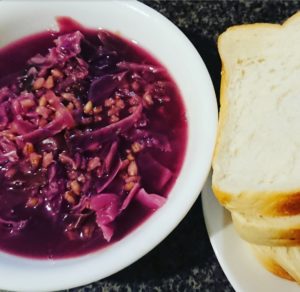 I overdid it this Easter. Like, really overdid it. So much so that I woke up this beautiful Easter Monday feeling terribly ill and with a pain in my belly that my husband was convinced was my appendix getting ready to burst. It wasn’t. It was just my body in revolt from the shocking way I’ve “nourished” it over the past couple of days. I’d entered the long weekend knowing that my usual rules were going out the window, and had every intention of getting back to my usual routine today. It’s always destined to be a Monday, right? However, my body thought it would help me be damned sure that I did in fact get back into it, by making me sick to my stomach at the mere thought of food.

After a few hours of feeling like total crap, I slowly, slowly started feeling better. By late afternoon, I was actually starting to feel hungry.  I was craving vegetables and simplicity. But I also wanted a new-to-me dinner that was interesting, while not putting any stress on my somewhat ginger stomach. Nothing fatty, or rich, and in no way related to chocolate or cake.

Once again, I was relieved that I have an arsenal of recipes stored in My Fitness Pal, with the calories already calculated, links to the recipe, and my own adaptations noted. It REALLY makes life easier, especially when you don’t really have a clear idea of what you want. Scrolling through, I saw the link to Smitten Kitchen’s Cabbage and Farro Soup, and knew that I’d found what I’d be cooking tonight. I did make some changes – I added ginger, used red cabbage instead of green to give it a beautiful rich purple colour (Deb bemoans how beige her soup is, but using red cabbage yields quite a dramatic looking soup), swapped out the farro for the pearl barley I already had in my cupboard, and eliminated some of the oil, because you really don’t need quarter of a cup here. All in all, the results were fantastic, and I’m looking forward to leftovers tomorrow, when the barley has drunk the soup and it transforms into a whole new cabbage dish. I also used a whole – albeit tiny – cabbage, and discarded the core, as a matter of preference. That left me with more cabbage than the original recipe calls for, so I increased the ingredients by 150% , meaning it serves 6, rather than 4. Which is a blessing, because, like I said, leftovers. My take on the recipe yields servings of 222 calories each, and that includes the parmesan with which the soup is served.