It’s always great looking for fresh, new snacks that get me happy to be cooking and ready for the week ahead. Bliss balls, veggie muffins, any little thing I can munch on mid-morning to get me through the work day, that not just satisfies my hunger, but also my desire for yummy, interesting food. I’m a creature of habit, but don’t like eating the same thing over and over again.

Which brings me to these cookies whose deliciousness belies the nutritional punch that they pack in every bite. Crunchy, sweet, seedy, oaty, and just salty, they’re a fantastic work snack for only 90 calories apiece (for a yield of 30 cookies). Granted, they’re not very large, but one of these and a piece of fruit or veg, and you’ll be good to go for ages. You could also make them 1.5 times larger and cook them a few minutes longer, because 135 calories for a substantial snack is nothing too terrible, either. I just like them little and cute, I guess! I used Kodiak power cake mix, and highly recommend it for both flavour and added protein, but wholemeal flour works well, too.

I never thought I’d be the kind of person to own a book called “The Detox Bible”. I don’t believe in detox diets – namely because I feel our bodies are perfectly capable of doing all the detoxification that they need, and don’t need magical juices or powders to help them along. I also don’t believe in “bad” foods that must be avoided at all costs, unless of course, you have an allergy. Nevertheless, when a local bookshop was having a sale on cookbooks and slashing prices by 75%, I’m willing to be more open to things.

I have to say, this book pleasantly surprised me. It’s wheat, refined sugar and dairy free (all of which I happily ignore when it suits me), but really, it’s pretty well balanced. It’s more often a case that these recipes are naturally free of these devil ingredients, than a case of the authors moving heaven and earth to swap these perfectly fine ingredients with ridiculous substitutions. I appreciate such common sense approaches, even if I don’t subscribe to the core philosophy.

Anyway, I digress. This dip is why I bought the book. It’s the first page I opened to when I was flicking through it at the store, and I was immediately sold. I love beans. Like, LOVE beans. My family aren’t quite as enthusiastic, so while I use them regularly, I rarely make them the star of the dish… Until now. Combined with an array of crudités, this dip makes an extremely healthy, delicious, filling and cheap work lunch that will make you feel like some kind of nutritionally superior god/dess for only 240 calories (it’s 170 by itself). Did I mention it’s delicious?! Because, seriously, even I was taken aback with just how GOOD this is. Off a spoon, with crackers, as a bed for your egg – it just works with everything, and my new addiction.

2 handfuls of baby spinach (about 25g)

400g butter beans, drained and rinsed (butter beans are lima beans – I had no idea!)

Salt and pepper to taste

It’s a tragic truth that here in Australia, snickerdoodles are not readily available. I don’t think I’ve ever been in a store and seen a pack, or heard anyone casually speak of them. If not for the fact that American pop culture is ubiquitous, and the name sticks in your head (or, at least, it does if you have the sense of humour of a 12 year old boy), they’d be an unknown entity to me.

I remember once, when I was first trying my hand at cooking, making some sort of snickerdoodle slice recipe that I’d seen online, and by which I been thoroughly underwhelmed. Experience tells me now that I hadn’t completely cooked the flour out of the batter, which would account for the unpleasant aftertaste, but I still remained vehemently uncurious about these funnily named little snacks. I hadn’t thought about them for years, save for the occasional time they were mentioned in an American movie or show.

The day after Mother’s Day, I found I had a glut of cream cheese left over, and no inspiration for to do with it – not even a stale bagel, nothing. So, I figured I’d do some cream cheese cookies… because what’s life without a little naughtiness, right? It wasn’t until I’d made, eaten, and thoroughly enjoyed these cookies, adapted from This Silly Girl’s Kitchen, that I realised they were, essentially, a somewhat decadent snickerdoodle. Now I get the hype, because these are the best cookies I’ve ever eaten. They’re so fluffy and cake-like, they melt in your mouth, and are sweet without being too sweet. I could eat them all day. Of course, they’re 165 calories per (not huge) cookie, so they’re a special treat, but oh, my, what a treat they are! 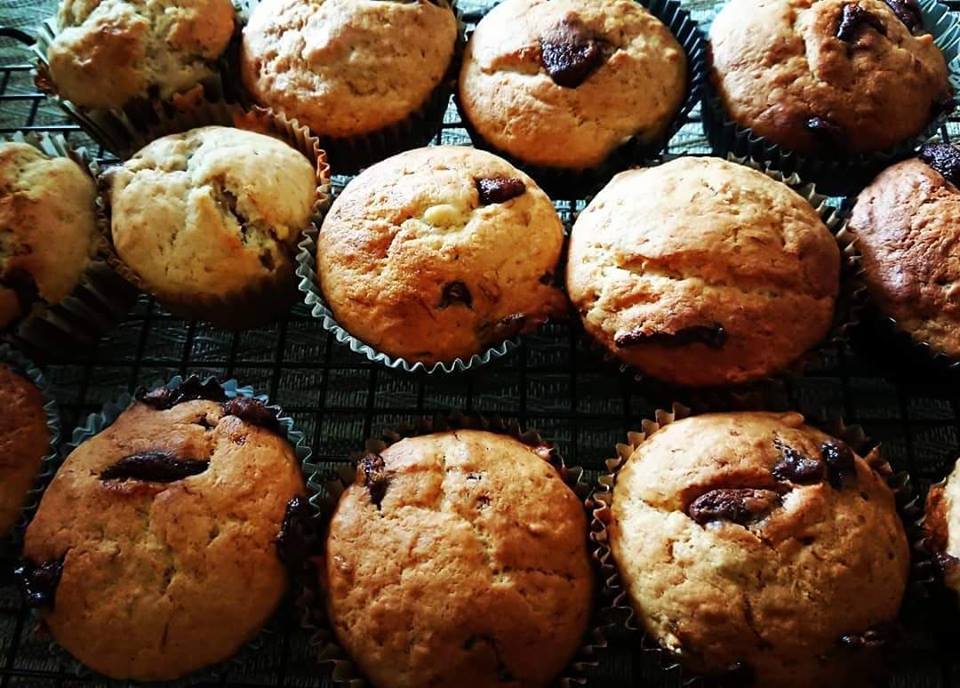 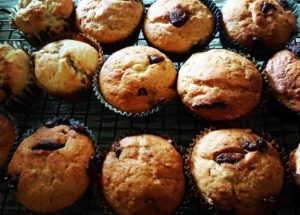 As with most kids who like to cook, Miss 7 loves baking, and that’s where her culinary career started – helping me make cakes and muffins. It’s simple and easy, and has a fabulous reward at the end – of course kids love it! However, Miss 7 isn’t really much of a cake person (unless we’re talking chocolate cake!), but she is an attention-loving person. She’ll shamelessly admit that she loves cooking, not for the end result, but for the credit. Chefs and their egos start young, it seems!

This recipe is pretty foolproof – remove the chocolate and the bananas, and you’re left with a moist and tasty basic cupcake recipe that you can pretty much add anything too. I can’t even remember where I found that particular recipe, but for the past 15 years or so, I’ve stayed pretty loyal to the flour, butter, egg, milk and sugar ratios, because it’s never failed, and everybody seems to love it. Then, a world of toppings and additions await, and the sky’s the limit.

I have calculated that the base cake recipe has 200 calories, so with the addition of the banana and chocolate, each muffin is about 240. I hesitate to become too technical with these because after all these years, I barely measure anything anymore. I tend to just estimate the calories of whatever I add to the base and call it a day. I mean, I’m not eating them when I’m being particularly fastidious about my food intake, anyway.

1/2 cup chocolate buttons (we used Nestle melts), chopped coarsely. There’s no reason you can’t use choc chips, but the large, uneven chunks have a charm of their own.